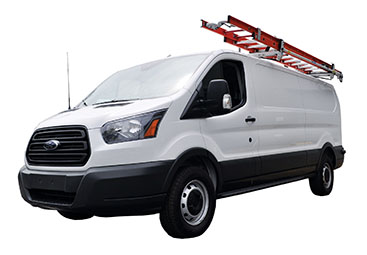 August 9, 2015, marks the 50th anniversary of the ultra-efficient Ford Transit cargo van. In celebration of this exciting anniversary, we have compiled a brief and fascinating history of the Transit. We’ve got some fun facts about the series that you might not be aware of, and we’ll also take a look into what’s in store for the Transit in the future.

History of the Ford Transit

The first rear-wheel-drive Transit rolled off the assembly lines in Langley, England on August 9, 1965. The original basic design continued to be produced for more than 20 years, with a box shape and a new style “nose” made to fit both the diesel and high-performance V-6 engines.

The Transit was given a major facelift in 1978 with a far more contemporary, less boxy look. This design stuck until 1984, when the engine size grew, but the first total redesign did not take place until 1986. Since that point, the Transit has adopted a more aerodynamic style similar to the Ford Sierra and Scorpio, yet the rear-wheel drive remained.

In 2000, the Transit finally became available in a front-wheel-drive model. The new design was efficient, modern, and remarkably successful. In 2012, the front wheel drive Transit was replaced with the Transit Custom and served up a modern-day version of the original “nose” design.

The most recent model has continuously sold out in the U.S. and remains one of the top picks for individuals and businesses in need of a space efficiency, reliability, and easily drivable utility vehicle.

Fun Facts about the Ford Transit

Transit has had a rich history over the course of its 50-year lifespan, and there are plenty of fun facts about the model. Here are some of the highlights:

The Future of the Ford Transit

In 2014, Ford announced it would be replacing its popular E-series vans in North America with the Transit. While some people have lamented the loss of the most popular van in U.S. history, the changeover has been highly beneficial to customers.

The Transit offers a sleek design with easy maneuverability, and its compact size makes city driving and parking a snap.

The Transit also offers more payload and cargo capacity than the E-series ever did, making it an excellent upgrade. Thanks to an innovative design and popularity in the U.S., the future of the Transit looks bright indeed!

Adrian Steel offers the ultimate line of products designed specifically for the 2015 Ford Transit full-size cargo van. Our quality products are the perfect solution for all your van storage needs. We offer:

Contact us online, call us at (800) 677-2726, or purchase your Adrian Steel Ford Transit products from a distributor in your area.

Connect with us on Social Media and let us know what you love the most about the Ford Transit!