8 Fiction Books Every Tech Will Enjoy

The Undeniable Connection Between Your W... Get Organized with an Adrian Steel Upfit...
Home Learn General Contractors 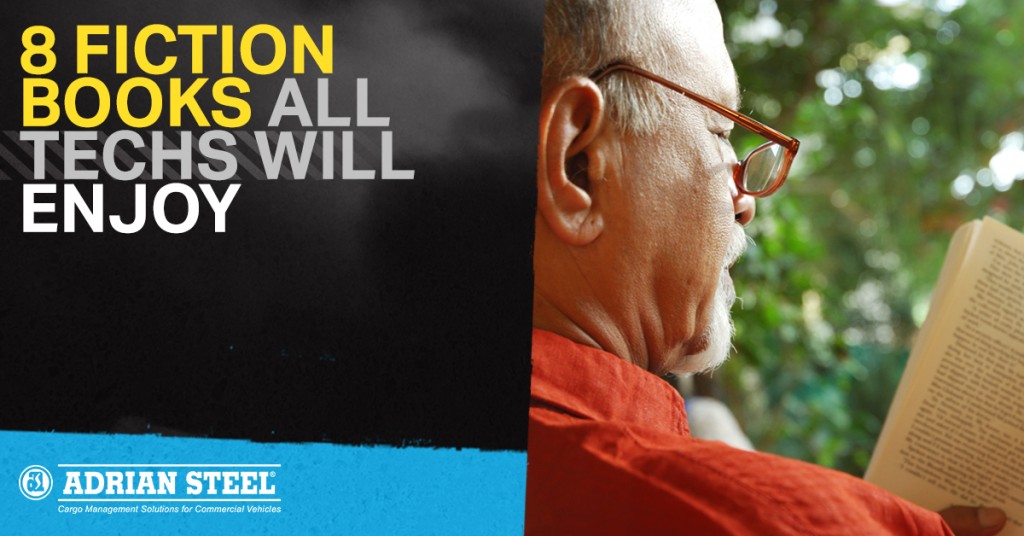 Books are enjoyable source of entertainment and education. Not only that, but reading fiction books help our brains develop in a healthy way. (Check out this article from Scientific American or this New York Times article for more info on how reading fiction benefits us.)

We’ve put together a short list of fiction books that service techs and contractors will enjoy reading during their work days. If you have to wait or need a short break, grab a book and relax for a few minutes. You’ll learn something, see life from another perspective, and be entertained.

Here are 8 fiction books you may want to consider reading:

Tyranny, governmental surveillance, torture – 1984 has it all. This short, easy-to-read sci-fi/political classic follows Winston Smith, an Outer Party member, through a tumultuous story about truth, the past, and a government who is intoxicated with power.

Feel like people only see a stereotype when they see you? Then you’ll probably relate to Ralph Ellison’s classic Invisible Man. This book is about race, identity, and what it means to be human, chronicled by a nameless narrator.

Classic line: “When they approach me they see only my surroundings, themselves, or figments of their imagination–indeed, everything and anything except me.”

Think your working conditions are rough? You might rethink that once you read Germinal. This novel casts a sharp light on conditions of French coalminers in the 1860’s. Poverty and oppression lead to a miners’ strike which ends in violence.

Classic line: “Blow the candle out, I don’t need to see what my thoughts look like.”

Sinclair wrote the novel in hopes of portraying the harsh conditions of immigrants in industrialized cities like Chicago. Instead, most readers were outraged by the unsanitary conditions in the meatpacking industry. Sinclair’s reaction: “I aimed at the public’s heart, and by accident I hit it in the stomach.”

Classic line: “They use everything about the hog except the squeal.”

Set in Maine, in the blue-collar community of Empire Falls, this novel explores a dying town and the inhabitants that live there.

Classic line: “And there comes a time in your life when you realize that if you don’t take the opportunity to be happy, you may never get another chance again.”

Seven: What Work Is, Philip Levine

Philip Levine’s collection of poetry was strongly influenced by his childhood in industrial Detroit during the Great Depression. He focuses on working class America with themes like labor, class, and relationships.

the sad refusal to give in to

rain, to the hours wasted waiting,

to the knowledge that somewhere ahead

a man is waiting who will say, “No,

we’re not hiring today,” for any

Rand described her novel as a mystery, “not about the murder of a man’s body, but about the murder – and rebirth – of man’s spirit.” Atlas Shrugged is an exploration of what America would be like if its most successful industrialists were to abandon society due to aggressive governmental regulations.

Classic line: “There is no such thing as a lousy job – only lousy men who don’t care to do it.”

You Deserve a Better Ride

When you work in your van for 8 or 12 hours a day, you have to consider your comfort and health. Installing a commercial partition in your van can help create a better ride:

Quickly cool or heat the cab of your vehicle.

Keep your tools and materials secure in the cargo area.

Contact us online or find a distributor to find the van partition that’s right for you and your business!

Connect with Adrian Steel on Social Media for more industry tips and tricks!

Read more on: books
PreviousThe Undeniable Connection Between Your Work Van & Your ProductivityNextGet Organized with an Adrian Steel Upfit + FREE Gift for Your New GM Van